Düsseldorf is the capital city of Germany’s state Nordrhein-Westfalen (North Rhine-Westphalia) and has a population of approximately 600,000 people. What is now one of Germany’s largest cities, started off as a small village surrounding the church of St. Lambert and was granted its town charter in 1288. In 1380 the Earls von Berg were granted dukedom and moved into the city. In the early fifteenth century their residence was developed into a castle which was destroyed by a fire in 1872 – the castle’s tower was the only part to survive the fire which is currently a prominent symbol of the city. The city’s town hall was completed in 1573 and is still a popular attraction in the city. The opera house and the art gallery were built next in the mid 1600s. The famous Hofgarten, Germany’s first public park, was completed in the 1700s and has remained a public botanic garden. In the early 1900s the Ehrenhof was built near the Hofgarten which is now home to many museums, performance venues and the Tonhalle, the city’s concert hall (originally built as a planetarium in 1926). The city is currently an international business and financial centre. It is also well known for its fashion and trade fairs, its cabaret, its theatres, museums (e.g. Goethe-Museum and Hetjens Museum), art and history institutes, gardens and sports facilities.

Rheinturm – the Rhine Tower is a 240.5m high telecommunications tower in Düsseldorf. It was completed in 1981 and is the tallest building in the city. Visitors are able to take a lift up to height of 170m (the lift travels at 4m per second!) and enjoy a spectacular view from the revolving restaurant and observation deck. The windows in the restaurant and observation deck run from the floor to the roof and are tilted so that visitors are able to look straight down at the base of the tower. On a clear day, visitors are not only able to view the city, but a large proportion of North Rhine-Westfalia – even all the way to Cologne!

Königsallee – the Königsallee (or King’s Avenue) is a famous avenue in Düsseldorf. It is known for being the luxury retail centre of the city, as well as for the canal which runs along its centre. It is approximately 1km long and starts at the Hofgarten. The canal and boulevard were completed in 1804 and the boulevard was originally named Kastanianallee (chestnut avenue, as the canal is lined by chestnut trees), however, it was renamed in 1848 after King Friedrich Wilhelm IV visited the avenue and had horse manure thrown at him (the avenue was renamed as a gesture of reconciliation). Düsseldorf is currently one of the world’s fashion capitals and the Königsallee is home to many famous luxury brands, such as Bulgari, Cartier, Chanel, Gucci, Louis Vuitton, Prada, Tiffany & Co. and Swarovski. 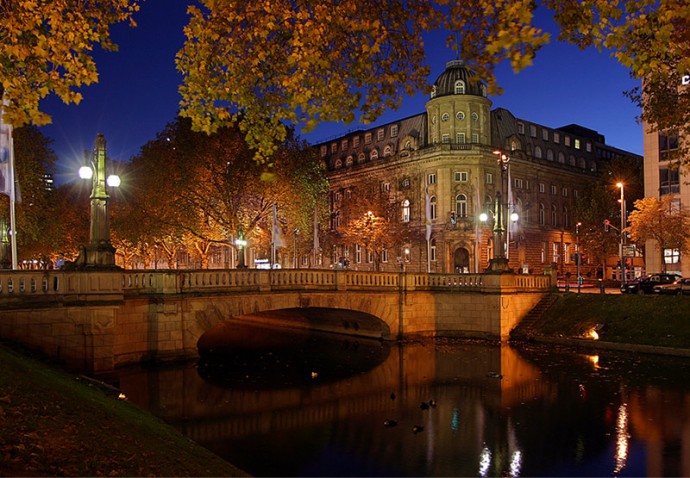 Altstadt – the Altstadt is the city’s Old Town. It is home to countless restaurants, cafes and pubs as well as most of the city’s cultural venues. The Burgplatz is in the heart of the Altstadt and currently holds the remains of the castle which once stood there. The Altstadt is lined with beautiful architecture is transformed into a winter wonderland during December when it holds the city’s main Christmas market (see below). 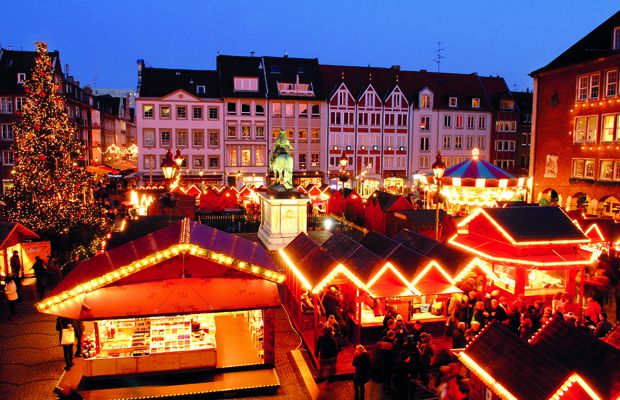