What a week it has been!

The World Cup final on Monday morning had us all sitting at the edge of our seats just hoping for a goal by Germany! After approximately 110 minutes of game time it finally happened – Mario Götze scored the winning goal for Germany! After another 10 minutes the game was finally over and the celebrations started!!

After a hug from Angela Merkel the boys received their gold medals and were showered in gold confetti as they passed the trophy around the team.

After their celebrations in Brazil, the team headed back to Germany where the party properly started in Berlin with over half a million fans! There was dancing, singing and chanting and even German singer Helene Fischer made a surprise appearance with her latest hit ‘Atemlos durch die Nacht.’

The celebrations have been going on all week, as the German players have been making their way back to their home cities, and Germans all over the world show no sign of stopping the party any time soon!

Here is a link to just some of the best moments from the past week, showing just how crazy it has been!

We hope you have all been enjoying the World Cup as much as we have – now we can finally start to get back into a normal sleeping pattern without getting up for the 2am, 5am and 6am games!

Posted on July 9, 2014 by Oktoberfest for Teens

At 6am this morning German football fans around the world were proudly wearing their black-red-yellow outfits and watched the game against Brazil begin. 11 minutes into the game Thomas Müller scored the first goal of the quarter final, but what followed was nothing short of legendary.

Germany scored 4 goals within 7 minutes and with his goal in the 23rd minute, Miroslav Klose secured his place as the highest World Cup scorer of all times! At 36 years of age this is his 4th World Cup playing for Germany and we could not be more proud of him!

But the game wasn’t over yet….

Germany entered half-time with a 5-0 advantage and scored an additional 2 goals in the 69th and 79th minutes. Just before the end of the game (and probably because they were already celebrating!) Brazil managed to score a goal in the 90th minute, giving a final score of 7-1.

Not only has Germany secured their place in the World Cup finals, but have now scored 221 World Cup goals, moving ahead of Brazil to become the tournament’s highest ever scorers! If that wasn’t enough, no other team has ever scored 7 goals in the semi-finals of the World Cup!

Here are your Oktoberfest for Teens organisers celebrating after the 7-1 victory!

The game between the Netherlands and Argentina tomorrow morning at 6am will decide which of these two teams will battle against Germany in the finals on Monday at 5am!

How to… German Flag Nails!

Posted on July 4, 2014 by Oktoberfest for Teens

With the Germany v France game only a few hours away, here is a little tutorial on how you can show your support by painting your nails!

All you need for this is black, red and yellow nailpolish (and lots of paper towels if you’re as messy as we are!). Make sure you don’t do this on or near any light coloured furniture – we did this on the floor and made sure it was all covered with several layers of newspaper!

Firstly, paint about half of your nails yellow, ensuring the tip is completely covered and let them dry. 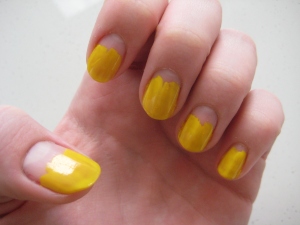 Colour in 2/3 of your nails in red, leaving the 1/3rd of the tip yellow and again, let them dry. 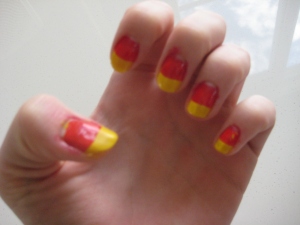 Finally, cover the last third of the nail with black nailpolish, let the nails dry and then, using a Q-tip and some nailpolish remover, clean up any excess nailpolish from your fingers. This was our attempt: