Posted on September 16, 2015 by Oktoberfest for Teens

Our third Infosheet is about one of our favourite topics – games! Not the ones that require a CD or a gaming console (we’ll get to that later on!), but rather, board and card games!

Germans LOVE their games! Especially during the winter months when it gets very cold outside and the sun goes down early, many Germans will spend hours sitting around a table with their friends and family playing games.

German card and board games are quite unique; they are often based on strategy or logic, rather than luck, they are often simple, yet very clever, they are designed to have a minimum amount of down-time and a maximum amount of player interaction. Whilst many people stick to Games that they know, Germans love to find new games and you’ll often find that popular magazines contain a game review along with their movie and music reviews. Germans love games so much that they even have an annual prestigious award – the ‘Spiel des Jahres.’ The ‘Spiel des Jahres’ award is so highly regarded that a nomination will increase a typical game’s sales from approximately 500-3,000 copies to around 10,000, whilst the winner of the award can expect to sell around 300,000-500,000 copies!

Some of the most popular games include:

Die Siedler von Catan (The Settlerss of Cattan): a board game where players attempt to establish cities and settlements on the island of Catan. The Settlers of Catan has been referred to as “the board game of our time”, has been translated into 30 languages and has sold over 18 million copies worldwide. It was first awarded the Spiel des Jahres in 1995 and has since won 7 other major game awards around the world. It may be 20 years old, but it is still loved by the young and young-at-heart!

Carcassonne – a tile-based board game named after the medieval fortified town Carcassonne in France. Players can build cities, fields, roads and cloisters, place figures on their tiles for extra points and, in the end, the player with the most points wins! The game is so popular that there is even an annual international Carcassonne tournament held in Germany. 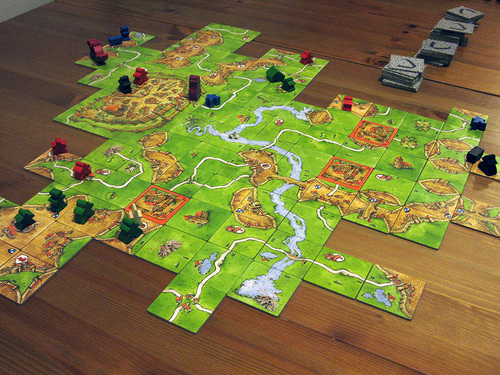 Caesar & Cleopatra – a 2-player card game where Caesar and Cleopatra (i.e. the 2 players) battle it out for the most points. Both Caesar and Cleopatra ultimately want full power over Rome, but they’ll have to gain the vote of the people (i.e. points) to win. It’s not as simple as that though, be aware of the spies and the many action cards that may force you to reveal your points!

Bohnanza: a card game for 3-5 players. The playing cards feature images of beans with different personalities (Bohne is the German word for bean). The game involves card-trading and the building of bean-fields – the more beans of one type, the more points you get! Seems simple enough, right? Wrong! Chances are you’ll be looking for the same type of bean as another player, so you’ll have to make an important choice – to hope for the best or get rid of the bean field and build a new one!

Ligretto – a card game for 2 to 12 players where the aim of the game is to get rid of all cards as quickly as possible. The game isn’t made up of turns, but rather, it’s every player at once and every player for themselves! Cards are red, green, yellow and blue and range from numbers 1 to 10. Cards must be discarded in numerical order and according to colour – it’s an extremely fast-paced game and once a player has discarded all cards, he or she yells “Ligretto Stop!” and the game is over. Each game usually lasts between 5-10 minutes, so it is common to play 10 or 20 games in a row!