Posted on August 17, 2015 by Oktoberfest for Teens

Bonn is one of North Rhine-Westphalia’s largest cities with around 311,000 inhabitants. The city’s history dates back to Roman times; approximately 11BC the Roman army stationed a small unit in the area which is currently the historical centre of the city. In 1949 Bonn became the de facto capital of the newly formed Federal Republic of Germany for 41 years until the reunification in 1990 which saw Berlin become the capital city of Germany again. Whilst most of the departments have moved back to Berlin, 8,000 of the 18,000 federal officials have remained in Bonn. Bonn is the second official seat to the President and Chancellor of Germany, as well as the Bundesrat (Federal Council). Two of Germany’s largest companies, Deutsche Post DHL and Deutsche Telekom currently have their headquarters in Bonn. The city is also home to 19 United Nations Institutions and the University of Bonn. It is also famously known as the birthplace of Ludwig van Beethoven.

German National Museum of Contemporary History – This museum focuses on German history from 1945 onwards. It takes visitors on a journey through the post-World War II era and the events leading up to the division of Germany into the Federal Republic of Germany and the German Democratic Republic. The museum offers its visitors free Audio guides in a variety of languages, however, the majority of the exhibits are in German. Museum visitors rave about the museum saying “This is a superb museum, which rivals any historical museum in the world” and “This museum… was by far the best museum I have ever been to.” [Reviews are excerpts from TripAdvisor]

Beethoven Haus – The Beethoven House, established in 1889, is the birthplace of Ludwig van Beethoven and has been turned into a museum. The permanent exhibition takes visitors back to Beethoven’s time. It is made up of twelve rooms which offer a deeper insight into Beethoven’s thoughts and emotions and their influence on his works. The exhibit also contains more than 150 original documents from Beethoven’s time in Bonn and Vienna. The museum is one of Bonn’s most famous landmarks, along with the Beethoven Monument, a large bronze statue, found on the Münsterplatz in the heart of the city.

Altes Rathaus (Old Town Hall) – Bonn’s Old Town Hall is situated in the marketplace. The foundation stone of the building was placed by Clemens August, Cologne’s elector and archbishop from 1723 to 1761, in April 1737. After an airstrike in 1944 only the outer walls of the building remained and it was rebuilt in 1949. Over time the building has been visited by many notable people, such as Bill and Hillary Clinton, Nelson Mandela and even Mother Theresa. 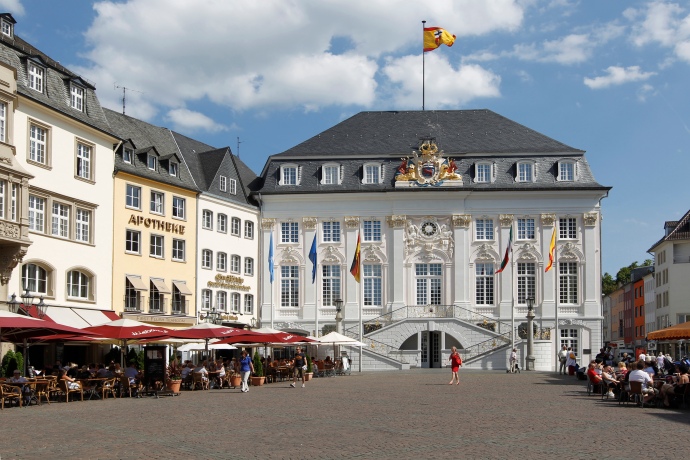